STUR started off her Saturday with an annual tradition:
Getting through the 12 days of “Fitmas” was her mission!
From “clusters” at day 12 to a pull-up at day one…
And lots of other stuff for 40 minutes of fun!

PBun again attempted a virtual group ride
And this time she did it all correctly and got her workout loaded right
It was neat to be part of a group of over 30
From all over the US and even other countries! 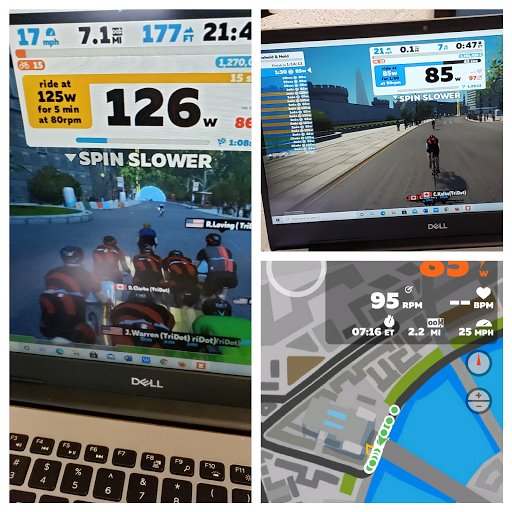 Just like in real life she was at the back of the pack
But the virtual rubber band kept most of the group intact! 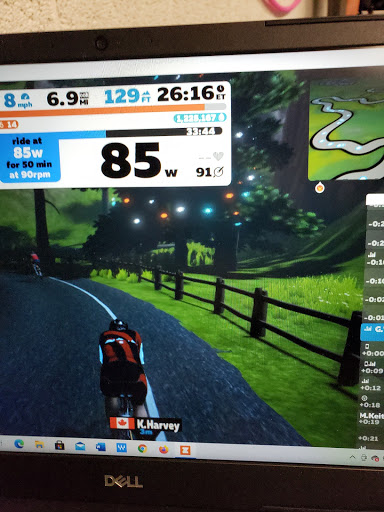 Later on STUR went into DC to experience ARTECHOUSE
The light installations and motion sensors were super cool without a doubt. 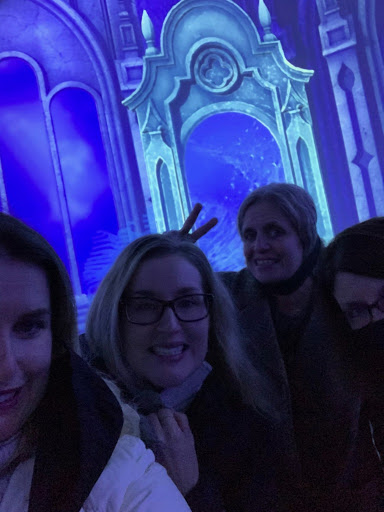 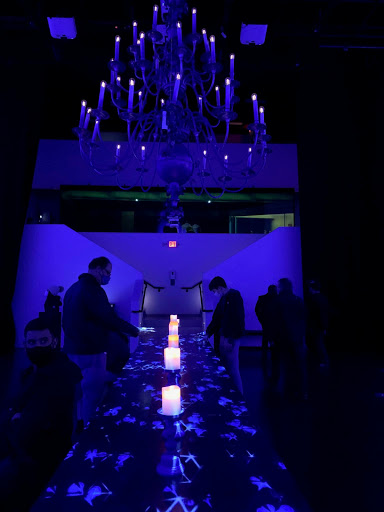 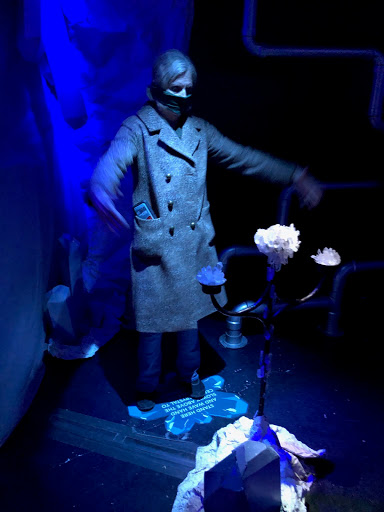 For a drink and a meal they headed over to Hops 'n Shine -
Outdoor seating would be just fine! 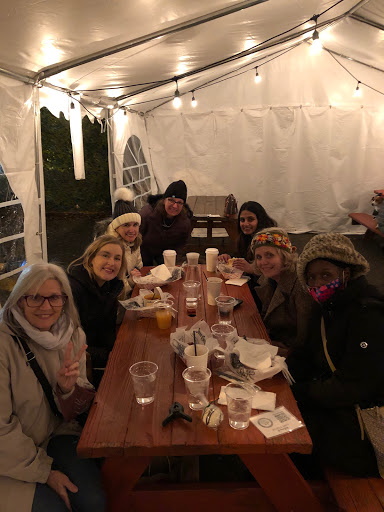 With the help of a tent and a heater gun...
Even Jell-O shots snuck in from PBun!
Later on they enjoyed one of the gas fire pits
It was nice to be able to warm up a little bit!
PBun enjoyed a cup of festive hot cocoa
It was definitely the way to go!

Sunday morning PBun had a 5k run time trial on tap
Would she improve over her last one? Oh snap!
After a short warm up she got the TT underway
Tried to hold steady for her usual course for a home 5k
In the end she did it and almost had a negative split
But this means her paces will adjust next week she must admit 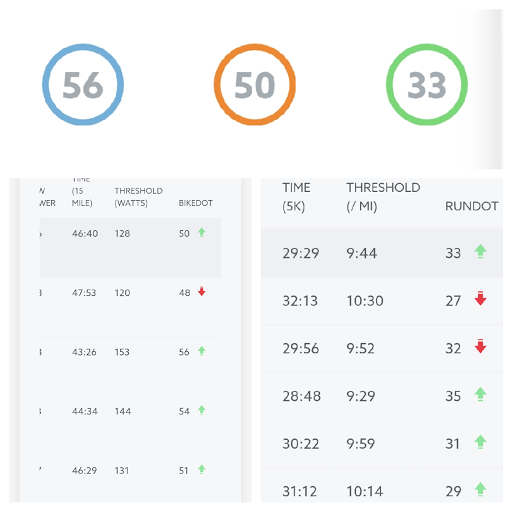 She 'bumped the dot' on both run and bike
So both will get more 'fun', if you like!
That morning long course swimming was STUR’s best option -
For 3000 meters of fun she hopped right in!
Off now she went to spin her legs out-
A relay style partner thing is what it’s all about!
That afternoon PBun assembled a gas fire pit of her own
It’ll be fun to hang out back with Riley and stay warm!

Sunday night, KBun got back in the pool
Swimming long course at TSJ is of course pretty cool!

Team Rabbit has a theme song!

Here's a throwback to December 1, 2018 when Team Rabbit hit the road to Ohio for the Regal Beagle Ultra! CBun caught STUR and PBun jamming to the Team Rabbit theme song. (Rewrite lyrics courtesy of STUR!)

Why not give it a listen? Go Team Rabbit, Go!

On Thursday STUR and PBun started their day the best way they know how-
At the pool with some sets of 400s - wow!
They moved onto the box for some WOD time -
Two (maybe 3?!) workouts in one day is not a crime!
It’s STUR’s annual birthday tradition -
This one will be the 54 Man Maker edition. 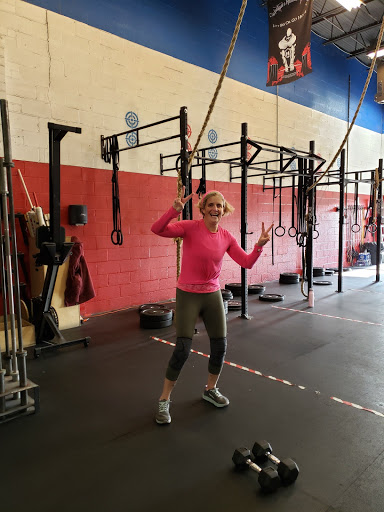 Celebrated after with a fun little snack
Donuts even without deadlifts, natch!
Swim practice Friday PBun had a stranger in her lane
Thankfully the swimmer was not insane
They both got into a good swimming groove
It was fast Friday y'all,  they sure did move
Saturday was a looooong partner WOD for STUR back at the box-
Just 80 reps of pull-ups, thrusters, snatches, squats, and box jumps until you FLOP
Meanwhile,  PBun tried a new thing
Virtual group ride with TriDot peeps is what that brings
It didn't start until 11am
A little late but what the heck
She had a little trouble figuring things out
In the end she didn't get to load her workout!
She hung in there anyway since she'd gotten in the group
Thankful for the virtual rubber band keeping her with them if you want the scoop
Most of the riders wore the same kit
Black and red for TriDot, what a trip!

On her birthday STUR may have drawn the short stick...
As at spin-fit she had to ride the echo bike - SICK!
But she persevered and also made it to the pool-
Swam for 90 minutes - so very cool!
PBun had a run on tap that included three by 4 minutes intervals set
What a lovely day out there even a little warm you can bet!
The weekend before PBun had a little socially distant event
Painting ornaments with old friends was heaven sent! 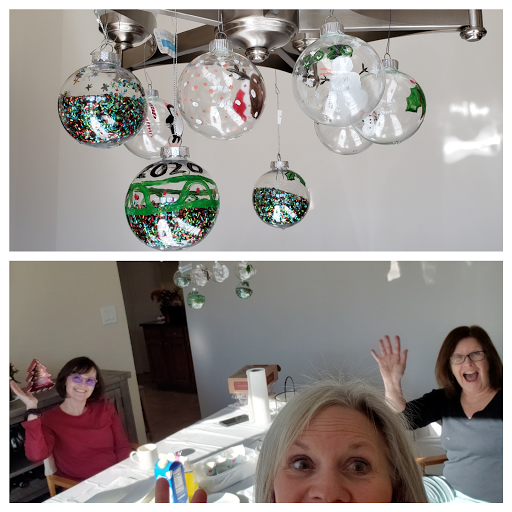 There might have been a throwback to the old cul de sac
Lime Jello-O shooters on tap, perhaps?
She later got up on her roof...
Santa and lights - here's the proof!

This rap will cover about two weekends
There was a lot going on for these rabbit friends!
KBun was off to Mexico you see
She was going to do Ironman Cozumel – woowee! 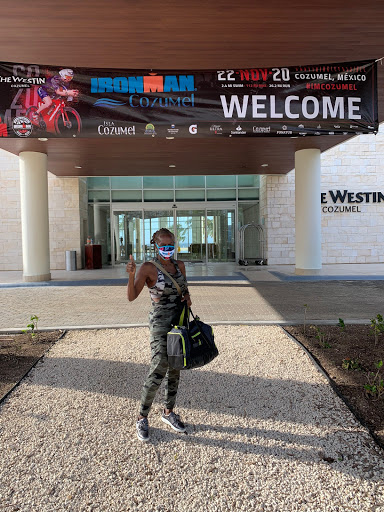 She had a great swim in the water that was amazingly clear
Saw a dolphin in the days before the race – it was so near! 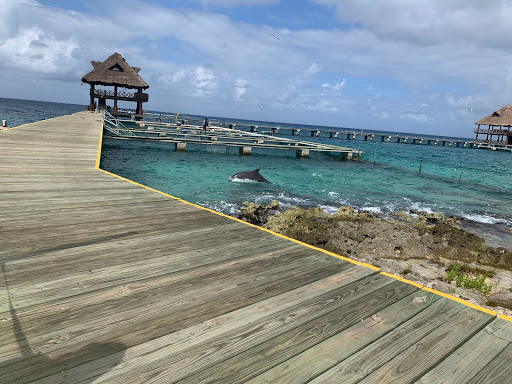 She might have a technical issue on the bike
But got it done in the end if you like! 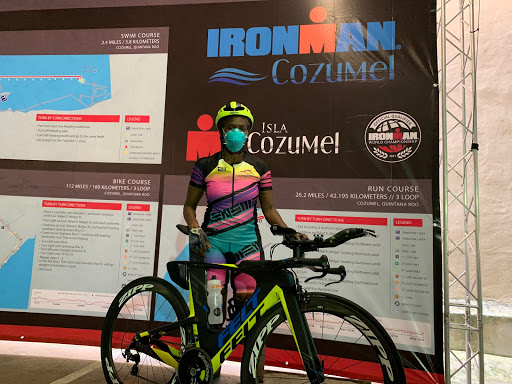 The run was her jam and she finished with time to spare
Thankful to get to race during this crazy COVID year
Meanwhile, PBun and Jeff met up to ride
At Prince William Forest Park, if you like 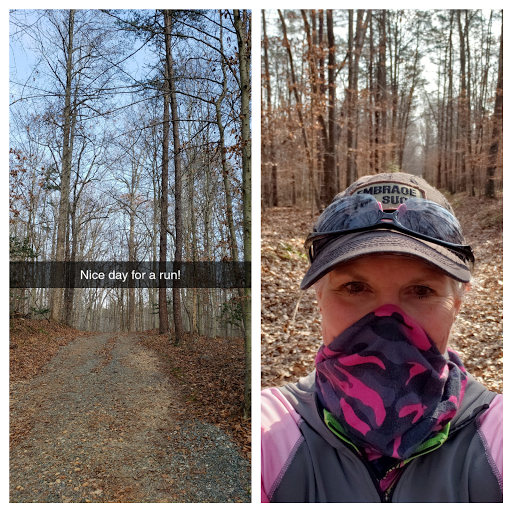 Before they knew it it was Thanksgiving week
PBun scooted out of town for a little treat
Riley was her co-pilot on the journey by car
And 560 miles is really not that far...

She ran America’s Turkey Trot with RBug
While Riley played with Izzy the new little pup!
She also banged out the Rock This Town Turkey Trot
She’s all about double dipping these virtual races, is she not?
On Thanksgiving STUR did her very own turkey trot 8K...
There were many other trotters on the trail - such a beautiful day!
JRab made enough food for probably 8 folks-
They had leftovers for many days - no joke! 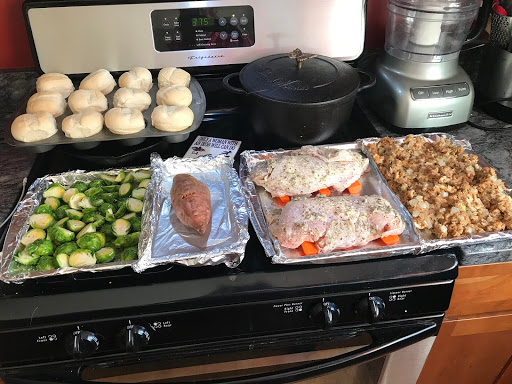 Saturday morning PBun did not sleep in
Not for lack of trying, is that a sin?
Met Laura at 9:30 to ride the NS loop
It was a fabulous day to be out there that's the truth!

Afterwards she worked in her yard for a bit...
Raking was on tap as it's the season for it!
Saturday morning at the gym is where STUR could be found -
She was greeted with deadlifts, burpees, and ring dips for thirty rounds!
After the workout a fun plan was hatched:
Off to the drive in movie to see “Pitch Perfect” they would later dash! 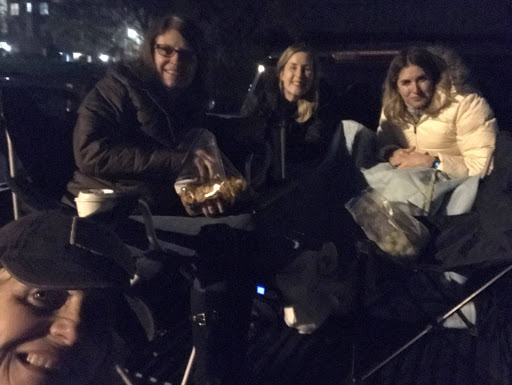 Sunday morning she was down for a run...
And the RNR virtual 5k Vegas sounded like fun!

More yard work was waiting involving the leaves
And believe it or not after she took a nap if you please!
Sunday she met up with the Beast at her old haunt -
At Chinquapin they made the most of their 45 minute pool jaunt! 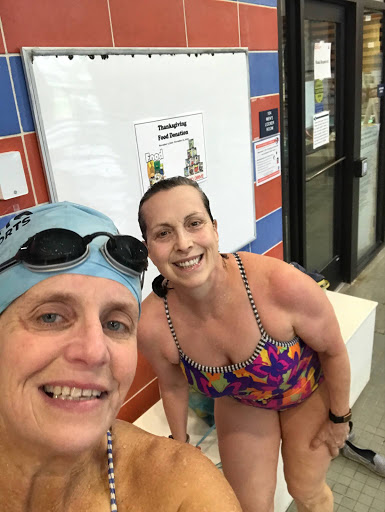 STUR was happy to tag along for PBun's virtual half marathon -
Before the crack to Richmond they were gone!
Arrived in good time to the start on a beautiful trail
Bunny ears at the ready without fail!

The venue this year for COVID-19 was at Dorey Park
The set up and social distancing worked well for packet pickup up and the start
The weather was perfect for running in a tank top
As the rabbits made their way through the course- hop, hop, hop!
So many inspirational signs and cheers along the way -
Even someone to help you cross the street? You don't say?

One lady asked PBun if she had a twin...
STUR had just run by her - made PBun grin
Another lady going by on a bike
Said the ears were the best thing ever, alright!!

In addition to completing the Richmond Half,
PBun also knocked out the virtual RNR DC, natch!

Later that day she tuned in to IMFL
As an amazing thing was going down
Chris Nikic was doing an incredible thing
The first Down syndrome athlete to attempt an Ironman - just amazing!
Followed him till he crossed the finish line
Ironman had a live feed going for his final two miles! 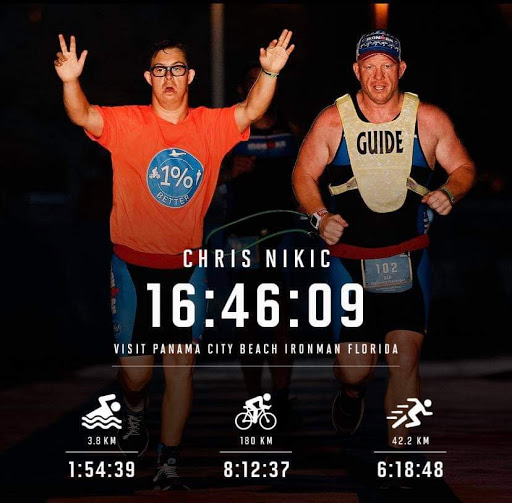 Sunday morning STUR and PBun met up at TSJ for long course swim
Did it feel good to stretch out in the water? Amen!
Next up for PBun was a short recovery ride
Only 45 minutes? To that she can abide!
Meanwhile,  KBun headed over across the Bay Bridge
For a mini getaway and training at where else but Cambridge! 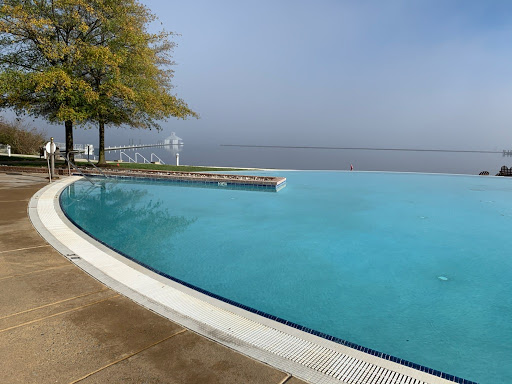 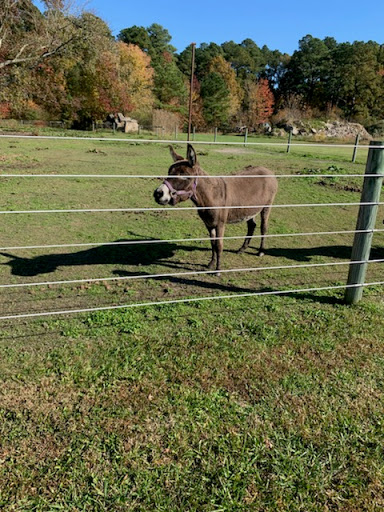 There were some nice views and she saw some cute mini donkeys
And then on the way home a cute kitty, you see! 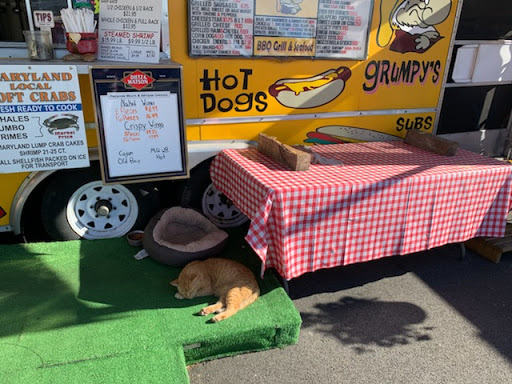 STUR planned a partner workout on Halloween morning...
Running, rowing, and deadlifts - it definitely wasn’t boring!
Sunday she hit the pool after an extra hour of sleep -
Always a good thing to get in some meters after jumping into the deep.
Now it’s pouring rain so nothing else to do
Dumbbells, jump rope and spinning - the time just flew!
Meanwhile PBun skedaddled out of town
Celebrating PGoodz's birthday was going down

It had been 10 years since she'd seen him on his actual birth day
It was nice that it worked out this way!

On Halloween afternoon while running an errand
Survived an encounter with Freddie Krueger, oh man!

Happy to visit Luna Buna, she brought her some special treats...
Christmas should be fun with four cats around the tree

Looks like CBun and HRab had a lite Halloween fun
Tiger King and his favorite big cat, any one? 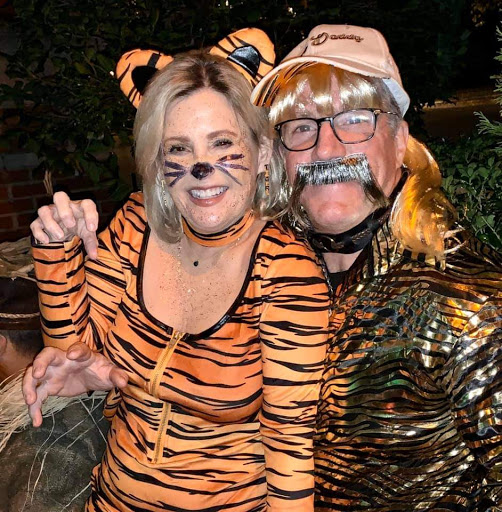