Lately STUR has been living somewhat of a life of leisure -
Going to the mountains then the beach gave her a bit of a breather!
STEB did a trainer ride on Friday after work
While watching The Replacements - it was a bit of a perk!
Later was dinner over at a friend’s house…
Couldn't eat outside because the mosquitoes were out!
STUR was back to work Saturday morning with a time trial on the trail -
She tried to keep up her pace without fail!
Ended up with 9.1 miles of running -
Must get busy the 50 miler is coming!
Saturday morning STEB headed to a meet at the box...
To voluncheer at the USAPL LCQ -  inspiring, fun, and she helped score the jocks!
STUR dropped by the box to witness that power lifting meet -
Saw a strong girl deadlift 400lbs - what a feat!
Later on it was 80s night at Nats Park -
A Curley W in the books and a Rubik's cube - not on a lark:
Em, STEB, STUR, (and BRab) were there: 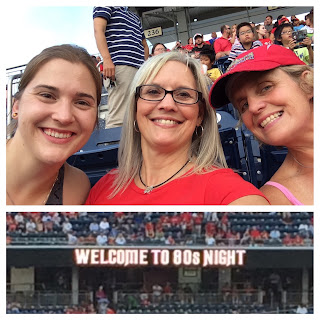 All enjoyed some of the ballpark fare.
The 80s movie and TV references were truly hilarious... 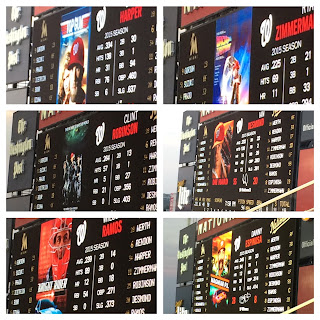 The players didn't seem to think it was any fuss... 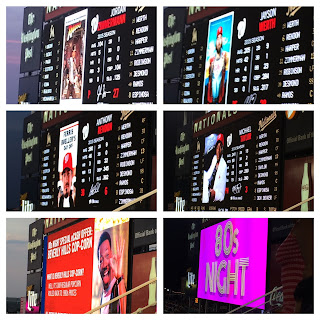 It was a wonderful night to watch the Nats win -
Lots of 80's tunes the park did spin!
They went all out - even the groundskeepers wore their 80's gear -

Even the mascot Screech "got into the groove" it was clear!
Sunday morning early it was time for STEB’s monument run...

Over six miles knocked out and the company was fun!
STUR’s was a relaxing day that started off right with a splash in the pool -
Realizing summer is nearly over though feels a little cruel!


STEB started Saturday off nice and early
She was going to bike the Reston Oly course surely
Trixie was happy to go for a ride
Had a bit of a tough time but took it in stride
Once back home she made a fast change
Then over to MVCF and she'd try not to complain.
For their Virtual WOD to End Veteran Suicide was to take place
Doing 22 reps of 22 sets is not a disgrace
To show respect for the emotional weight Vet’s carry
And also raise funds for Active Heroes, a 501c3 charity
We hope all veterans get the help they need
Because they are all amazing. Godspeed.
Then there was a MVCF BBQ later on
Thanks for the hospitality, V and John!
The never ending cornhole game was finally over
Once the final point went up the rest was a blur!

This weekend STUR and BRab headed to a WVA cabin -
48 hours of cooler air and quiet for the win!
Tessie went too as they headed out on Friday -
Rode in the new truck? You don't say!
Saturday morning STUR put on her running shoes -
Not before getting in a long snooze!
Her run included hill after hill after hill -
To stop herself from walking took lots of will!
Later she gathered up BRab and Tessie and they went out on a hike -
Got a bit lost on a trail but it was alright!
Brought lots of water and were out longer than they meant to be -
Ended up going about 5 miles you see.
Tessie crashed out and the humans went for a scenic drive -
Got a little internet service so they could survive!
Once back they grilled and had traditional s'mores...
Then they had movie night-they were never bored!
Next morning continued at a leisurely pace -
Did a little cleaning up so they wouldn't leave a trace!
One more much shorter hike for the gang of three -
Only about 2 miles it was to be!
Took another nap then hit the road;
Nice to hit the reset button and be a lazy toad!

Sunday STEB got up before the crack
Early start to the South Lakes 10k isn't whack!
One of the many  =PR= Races with a collectible pin
Another for the 2015 lanyard? It's not a sin!
Beautiful morning for an August race -
STEB's plan was just to work on her pace.
For miles 1-4 she did just that
But by mile 5 she needed to pull back
Got some Rabbit love from a couple friends of Kim
They are Rabbit fans - and that is a win!
Dug a little deeper for mile 6 then to the finish -
Running that last .2 pace all the time is her wish!
Later on Sunday STEB needed a nap...
She actually took two. How about that?

To donate to Active Heroes through the Virtual WOD to End Veteran Suicide, click here. 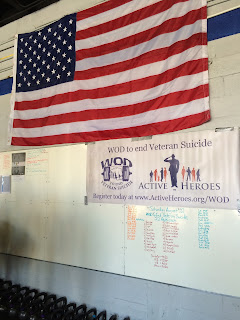 It was her cousin's wedding that day!
The next morning she got that 5K in;
Another state checked off for the win!
Put on by the Central Mass Striders group -
Everyone was so nice - that's the scoop!
Always at Worcester State U -
This week’s race was a clockwise loop!
She then drove home - made the long trek back -
Traffic jams? They sure did not lack!
Saturday morning broke bright and not too early –

A 7:30 start for the Beast and STUR made them happy, not surly!
STUR was ready for the 3x 5Ks!
But noticed it was 96% humid and said, "no way!"
Commenced to executing her Fort Hunt Loops…
It was tough, got it done- then said "whoop!"
No CrossFit today instead a Slurpee break -
By then it was 90 degrees for goodness sake!


STUR loved swimming in a pool that is Olympic sized -
Summer's end is quickly approaching - soon to it she will say her goodbyes…
Sunday night brought the annual Rabbit tradition:
FABBA at Wolf Trap on the lawn!
STUR went all out and said , “Shh...it’s a wig!”
Hoping some day she’ll get an ABBA gig!
CBun, STUR, STEB, and RBud enjoyed the show,
But didn't actually see anyone they know!
FABBA was great - as is always the case...
Sang Waterloo in English and folks were dancing all over the place!
Posted by gmgizmo9 at 9:00 AM No comments:

STUR thought this weekend was especially beautiful -
But still to her workouts she stayed dutiful!
Met up with CBun and WuDoc at a somewhat ungodly hour- 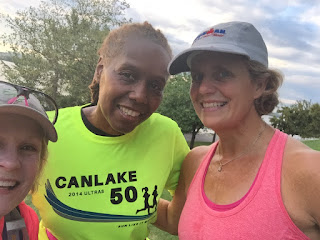 Meeting friends certainly gives you  the power!
The three bunnies hopped off to run towards the bridge and old town-
There were many pretty sunrise vistas to be found!


At STUR's halfway point the girls stopped to snap a quick memory: 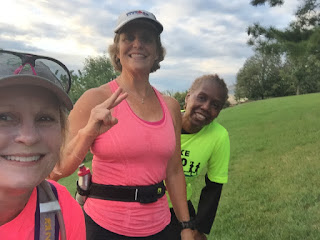 CBun and WuDoc weren't turning around yet you see.
STUR ran right on back to her car -
Had 2.5 hours before CrossFit - holla!!
Yay!! STEB and STUR went to CrossFit together as a team -
They had a challenging WOD to do it would seem...
It was called "14.4" and included rowing and toes to bar -
Also wall balls and cleans with the bar!
Got the traditional after workout Slurpee -
So glad it wasn't too hot today - whee!
Sunday morning had a swim with RBud!
Was challenged to a 50 meter race - what?

STEB was very happy to be back in her normal routine!
Though she wouldn't trade last weekend for anything!
This past week she traveled for work and couldn't take her uke...
Travel for work's not a normal thing. It was a fluke!
Toby Keith Saturday night at Jiffy Lube Live!!
Killer VIP seats in the fourth row? That's no jive!

Even got to walk the carpet

Was it a fun night? You bet!
Did STEB, RBug, and friends make it onto the Jumbotron?
If you were there you might have seen what went on!
This week should be more normal as well...
Though she's got another road trip Friday and Saturday - swell!
Posted by gmgizmo9 at 12:02 PM No comments:

With RBud on Saturday STUR ran a bit of a different way-
Went 6.3 miles then they called it a day!
Headed toward Old Town instead of George Washington's home-
In and around the waterfront, it was fun to roam!
A nice break before hitting another workout -
Going to be a challenging WOD without a doubt!
Running, dead lifts, and bar-over burpees -
It was hot but she got it done - don't you see?
Had a relaxing afternoon out in Del Ray -
Even Miss Tessie got to come and play!

The Old Keene Mill Pool on Sunday felt grand -
Lots of peeps to swim with on hand!

Friday morning early, STEB hit the road
With her son Andrew to Alabama they did go!
Made pretty good time and got to The Plains while still light-
Met up with John and then Patrick and went for victory fries - outta sight!

They also ordered a 'special container' of beer
That's 128 ounces you see there!

Saturday morning it was finally time!
Pat was going to walk through the graduation line!
Some of his friends showed up to support
Adam, Stephen, Avery, and Jean-Luc, and even Andy online - of course!

The graduation ceremony was really AUsome
With a cameo by Aubie at the very end!

Next it was time for a celebratory lunch
Who do you think went? It was the entire bunch!
Country's Barbecue was the place
Chopped pork platters were all over the place
Got a chance to use STEB's selfie stick
You can see she still needs to work on it!

Had to get a picture by the Auburn brick wall

Later on it was time for dinner
Mugshots was the place and it was a winner!
Next up it was finally time:
Sky Bar for shooters? It's not a crime!
The Librarian and Stonewall Jackson's were it
And let me tell you, they were a hit!
More fun and friends to round out the night
And a final group selfie - it's alright!

Sunday morning early was finally move out day
Hard to believe how fast these years went by - sad we couldn't stay
One last picture with the roomie...

Then time to hit the road again you see.
Posted by gmgizmo9 at 12:02 PM No comments: