Saturday morning STEB went to Audrey Moore REC
She can't remember the full workout but was there some fly? You bet!
Rushed back home and got on the computer
To sign up for Colonies Zone 1650 like CBun and STUR!
Spent her afternoon with family of sorts
And visited her 90-year-old aunt of course

STEB started her Sunday in her garage gym
Accessory lifting for the win
It wasn't raining at that point
She was excited to get to the bike ride joint!
On Sunday BLUR, STUR, and STEB didn't let the rain stop their plans -
Met at Fort Hunt Park anyway – I’ll be damned!

STEB, in looking for some motivation -
Wore her 'Evil Knievel' jacket - son of a gun!
BLUR got in her longest bike ride to date -
And in the pouring rain! Got it straight?

STUR ran around 4 loops on her own -
Then for another loop she wasn't alone
STEB joined her for part 2 of her brick -
Chatting as they ran made it go quick!
Then STUR chatted some more while she finished her burpees -
Today was day 88 you see!
Yes, Fort Hunt Park was the place
STEB did 12 loops around at a decent pace
After she wrapped up the bike
The loop with STUR it was out of sight!
While STUR did her burpees STUR planked a bit

Then it was time for them to git
Early afternoon she had coffee with RBud -
It was nice to catch up for the month!
Later that day she had much to do
Race calendar planning if you want to know the truth!

Meanwhile KBun was down in the Sunshine State
Running the Disney Princess Half for goodness sake!

At the start of each wave they set off Fireworks
For all 27 waves - that is one of the perks!

She donned a tiara and a tutu
Because that seemed like the thing to do!

She totally rocked those along with her bunny ears -
And got a pretty sweet medal - never fear!

It seems that CBun went to a drum circle meeting
Did she have fun on the drum she was beating?
Sunday afternoon brought STUR and the Beast's second swim of the weekend -
Practice went fast ending in relays - seemed like a whirlwind!
Posted by gmgizmo9 at 10:16 AM No comments:

Friday afternoon STEB and Riley hit the road
Headed to PA and their home away from home!

Upon arrival, pizza and the Olympics were on tap
Till she and Stilt crashed in the recliners – imagine that?
On Saturday STUR had a very rare event:
A complete rest day on a weekend was heaven sent!
She did however sneak in 79 burpees -
But doing them all through the day is kind of a breeze!
After a lazy start they loaded up the SUV
They were headed to watch some basketball if you please!
Stopped to pick up STEB’s uncle along the way
Just a 60 mile drive? You don’t say!

Arrived at Waynesburg U with plenty of time to spare
Heard a wonderful rendition of the National Anthem while there
Kare-Bear played a total of 17 minutes
With 9 points of the bench including a 3 – they went on to win it!

KBun and Lionel celebrated Valentines a tiny bit late...
But look at that food! It was worth the wait!

Sunday morning she went with Stilt and hit up her YMCA
That was the first time STEB had ever been in a Y – no way?

She got her powerlifting workout complete
And in the end a PR on the bench press – that was neat!

For STUR, Sunday LATE morning brought a marathon race -
The GW Birthday Marathon in this case!
Arrived on the scene WAY ahead of time...
Luckily the weather was truly sublime!
The start line is a half mile walk- oh bother...
She felt like she was being taken to the slaughter!
Loop one was the longest and fastest for STUR;
And 9.7 miles of run walk ratios did occur. 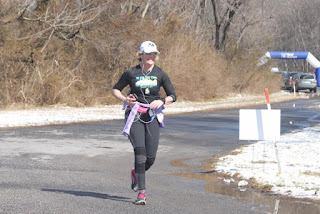 The second loop - she actually got too warm!
A bit slower pace became the norm...
Somehow STUR failed to bring along her little bag of pills -
Needed some Advil for all these hillz!
Ended up getting some from another runner along the way -
This older gentleman literally had an entire bottle - yay!! 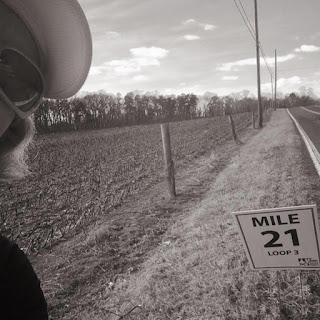 Third loop included an extra long hill-
But seeing the finish line is always a thrill!!
STUR hadn't done a stand alone marathon in 4 years -
Always glad to add another medal to her souvenirs! 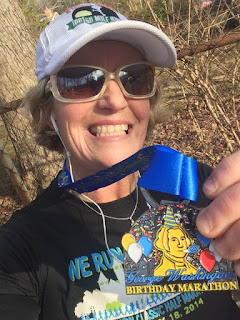 Riley and STEB headed for home late Sunday morn....
They saw some abandoned vehicles along the way from the storm! 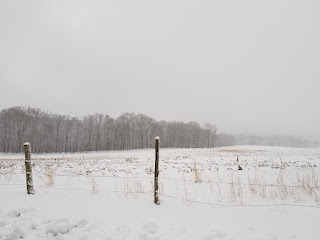 So staying put was the right move
And Riley had extra time with her dog mom, too! 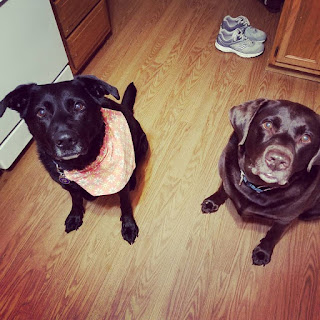 Friday night STEB went to the monthly uke club meeting
Even without the Beast it was a fun gathering!
Added a new song to their list of regulars you see
"When the Saints Go Marching In" seemed kind of timely!

On Saturday STUR and STEB did their double:

Swim practice then a race - really no trouble!
STUR caught a ride with STEB to Audrey Moore -
This looks familiar she'd been here before!

Jumped in a lane and got to work -
A couple of 600's was definitely a perk!
At first STEB started off one lane down
Got moved up to STUR’s lane – she did not frown!
Made a quick change into running gear -
Both bunnies remembered their ears- never fear!
They skedaddled over to Langley Fork Park -
For in the Langley 8k they would soon embark.
Just enough time to get their numbers and be ready...
STUR did a few burpees and had a Gu to keep her energy steady!

The race was small and started with a "GO!"
Soon onto a running path they would all flow.
After the path was some time in a neighborhood...
Started to drizzle a bit,  but it's all good!
STUR found the race to be somewhat hilly -
Only walk breaks were down the hills...really!!!
For STEB it was the opposite:
Uphill walk breaks are legit!
After a bagel and some Gatorade the bunnies weren't through,
Had some burpee and plank stuff to do!
Some might think doing burpees in the rain
Might be a little crazy and insane!

Saturday afternoon STEB went to visit her Aunt Terry
She is her god mother and happens to be 90!

Saturday night was kind of a movie night:
STUR and JRab first; STEB and Cool Breeze whose ended at midnight!
They all caught up with each other in between
A fun surprise, it would seem!
STEB and  Cool Breeze decided to skip dinner
Flourless chocolate waffles at Carlyle for dessert, a winner!

On Sunday due to the late night STEB kind of slept in
But then went to powerlifting and did deadlifts again!

After that she headed over to NanWa’s house
They visited, had an early dinner, then a movie, no doubt!

It was mostly women and a bit of a rowdy crowd
And a couple people talked through it a little loud!

On Sunday STUR hit the pool a little early…
Got in some meters before masters surely!
Then she swam with the L4 group
Got in three miles total - whoop!
Posted by gmgizmo9 at 9:12 AM No comments:

Saturday morning - STUR was in it for the long haul -
She planned some distance - walk, run or crawl!
Posted up at Carderock Recreation Area -
The weather was very cold but it wasn't a barrier.
When 17 miles ended up being her final tally -
Was she ready to stop and do burpees? Gladly!
STEB had a Saturday triple on tap
This involved swim, run, then lift as a matter of fact
Deadlifted the most that she had in a long time
Then got in a nap before rabbit roundup which was fine
The Beast and CBun did runs of their own
Each both from their own home.
Does this make them super rabbits?
Not really sure but it is a fun habit!
Those four rabbits gathered at Joe Theismann's place…
Seemed a good venue before Super Bowl LII in this case!
It seems it was restaurant week in Alexandria
Did all rabbits chose that option? Duh!
After STEB tuned into the #RadioParty and tweeted it out
Then Dave Johnson gave her and PGoodz a radio shout out!
Sunday morning STEB got in a spin at a steady pace
Before heading to Tyson's Playground for squat day
She also got to try out the seated calf raise machine
By the end her calves were burning it would seem!
Meanwhile, STUR headed over to Mount Vernon Rec -
Was it a long and warm swim? You bet!!


BLUR spun on her trainer and did a killer workout STUR planned
It seems she can kick BLUR's butt remotely -- oh man!
Sunday afternoon during the #PuppyBowl
They had bunny cheerleaders, truth be told!
STEB made queso to have with tortilla chips

Along with cheese popcorn served in an old football dish!