This is our xtranormal video from our cheer and volunteer experience at Ironman Wisconsin 2012. It is of course in 'rabbit rap' format! Enjoy!!

At the start of the great pumpkin ride it was chilly!Don't forget your cold weather gear silly!Our faces were freezing, our hands were cold,But it's going to get warmer later were told!First part of the ride was on an old rail trail.Crossed roads with a cop's help without fail!Many of the roads we'd been on before.Saw them from different angles so it wasn't a bore!The aid stations were packed with really good food.We waited patiently in line so we wouldn't be rude!There were cookies, pretzels, pie, and pumpkin bread!And these Rabbits exclaimed, "Oh what a spread!"At the last rest stop we ran into Sally the Rabbittear!She hadn't been on her bike in months but she had no fear!The last 10 miles were a bit hilly and rough;And we finished strong because we are tough!The post race party had more goodies to eat;If you dropped your food you got a replacement - sweet!After our snack we saw Judy and Leanne!They're prepping for the Miami Gran Fondo - where they can get tan!

New Rabbit Blog on the Horizon!

Silly Rabbit has a new blog! Check out Fitness with Carol, where she will be posting Iron Tips (FE Tips)! These are all helpful tips to keep you moving and fit and are easily fit into your schedule at almost any time and place!

Energizer Bunny ran a race with friends and family.
The Hershey Half Marathon was the place to be!
Met up on Saturday for roller coasters and dinner
This rabbit thinks we all came out winners
Sunday morning it was back to Hersheypark
With 5,000 runners - who all have heart!
The race supported the Children’s Miracle Network -
An area where we should not shirk!
Caden was this year’s Miracle Child
He got the runners started and we all smiled!
Started off running around the park grounds
Saw the finish line after the loop around.
Then we ran for a bit in the park...
Ran by the coasters we rode in the dark!!!
Exited the park and ran by a zoo.
Saw a bull moose and smelled moose poo!!
Was running with Lisa who was doing her first half race
And saw Christy from Team Z when we crossed paths along the way!
Next up were the Hershey County Club roads
Along a beautiful golf course and some hills we toed!
After the highest point on the course was done
We then ran by the relay hand-off point station!
Spent a few miles on campus of the Milton Hershey School
The kids were out cheering and were so flippin cool!
As we headed back towards the park to the finish line
Had to split from Lisa because I needed a break this time...
In the last mile or so there was a candy rest stop!


Got my Hershey bar and kept moving; chop-chop!! 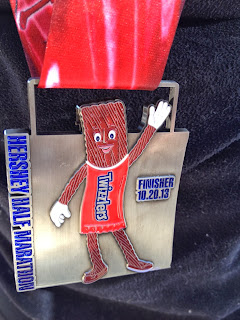 Back into the park grounds, the end was in sight
The Hersheypark Stadium was just up ahead to the right!
Had to run around the outside and then went in
Saw the finish arch and it was time to sprint!
Almost missed our awesome Sherpas at the end
But they shouted out before I went around the bend!
Smiling - of course - I crossed the finish line
Then saw Christy’s husband Greg waiting on the side!
Cousin Lynn ran with her friend Marcy – it was her first, too
They trained very hard and totally saw it through!!
We all met up in the middle of the field for a photo
With our Twizzlers finish medals we proudly showed!
After we all walked over to Hershey’s Chocolate World place
At 5 pounds, they have the largest chocolate bar of anyplace!!!!
A super fun weekend with family and friends,
This rabbit would definitely do this race again!
The volunteers were super and it was well organized
And 5,000 runners seems perfectly sized! 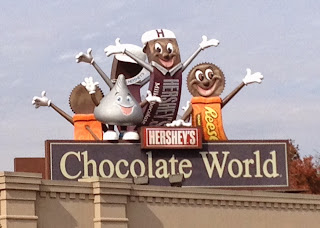 We never thought we'd get of town

Finally we got close to CanLake
It was close to midnight for goodness sake!

Two foxes and a man on a bike-
Sights you just don't normally see at night!

Managed to get some good night's sleep
Didn't have to get up to early you see!

It was a  beautiful day for an ultra run-
Team Rabbit and the Rabbittears were ready for some fun!
Team Rabbit was welcomed when we  arrived for packet pick up
Folks knew us from the FB group due to Sally's write up! 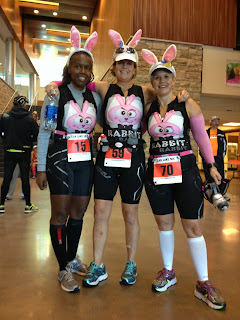 We took the bus to the start of our race

Saw Sally on Bopple Hill - she was keeping the pace!
Got to the marina where the 50k was to begin-
Saw our handler P-Diddy - our Number One Fan!
A little behind schedule from a shuttle bus snafu.
Minutes to use the porta potty? Only a few!
Burpee challenge was in the twelfth day...
Actually got the first one out of the way!
Lined up at the back of the parking lot -
"On your mark, get set, go!" was all that we got!
First rest stop at Monica's Pies-
Porta potty there to our pleasant surprise!

We went back and forth with a couple of men -
They asked were we doing 5 and 1 like them?

Saw our "Handler" near our first official rest stop -
Such great scenery for a nice photo op!

Saw many caterpillars going back and forth on the road.
We guess they were headed to their abode!

Table was fully stocked and they were very kind -
Silly Rabbit tried Gu Chomps for the very first time!

The Rabbits hopped along on our merry way -
A girl said she'd been looking for the rabbits - made our day!

As we ran along we realized there's something we forgot.
We didn't do our burpees at the last aid stop!

The next aid station was the only cut off time;
Made it there, did two burpees and felt just fine!

Seems they were rationing the supply of Gu Brew -
We snagged just enough to see us through!

We saw our Number One Fan again;
She gave us some beverages and made us grin!

Soon after we hit our first climb -
That Cat 5 hill stayed on our mind!

Energizer Bunny was happy for all the downhill -
But Silly Rabbit really thought it was a pill!

Finally the downhill came to an end -
Aid station in sight as the road took an end!

The course took us on an out and back -
Most stay focused to stay on track!

Reconvened at aid station number three -
Dropped to the ground and did 3 burpees!

Next we were on to a series of climbs -
The Cat 4 never ending hill simply blew our mind! 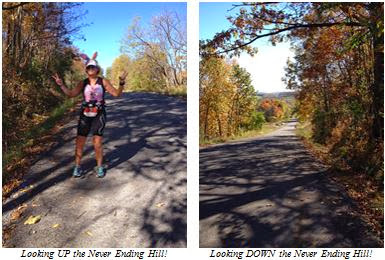 Finally made it to aid station four -
After this there was only two more!

That's when Energizer Bunny had a panic attack -
There was a yellow jacket bee on the brim of her hat!

Silly Rabbit really had to pee -
Hide behind the umbrella so no one can see!

Now it was time to hit the road again -
"Only" a half marathon to go till the end!

Now it was time to break out the tunes-
Musical motivation put us over the moon!

We asked P-Diddy about What's Up Doc's race...
She said she keeps missing her with her very fast pace!

Next we arrived at the fifth aid station -
We could get lessons from them in organization!

Here we got to see P-Diddy again -
Team Rabbit also made a new friend!

A girl got out of the car for a photo -
She wanted it with Team Rabbit don't you know!

After more burpees it was time to move along.
With music playing we kept singing our songs!

Met Bosco and Gracie our new canine friends.
Keeping our spirits up - it must be a trend!

We hit the marathon mark during this stretch -
There was absolutely no time to kvetch!!!

Finally hit the last aid stop.
Two more burpees - to the ground we did drop!

Just 3.7 miles was all we had to go -
Then, "we're ultramarathoners!" we could crow!

Less than a mile to go we had a downhill of grass?!
We just hoped we wouldn't fall on our @$$!!


The finish line was a wonderful sight -
We finished strong and there was still daylight!!

We regrouped and took a picture with What's Up Doc
Then had some chocolate cake that hit the spot!

Went to our hotel room so we could clean up.
Then back to the finish to see Sally and say "S'up?"

Parked the truck and put the bright lights on that grass hill.
So Sally and her running "escorts" wouldn't take a spill!!

Sally is now headed to the finish line
We drove over there in the nick of time!!

She finished the 50-miler with all her heart
The race director gave her a medal - that's the best part!!

CanLake50Ultras was an awesome event
Sally's recommendation was heaven sent!

All the folks involved were incredibly nice!
Would Team Rabbit recommend it? We wouldn't think twice!!

A very special shout out to our Number One Fan..
She's truly the BEST HANDLER in all the land!

Bridge and Back Rap

Gonna bike 40 miles you see!
Started off it was kind of chilly -
Should have worn arm warmers silly!
Dodged lots of peeps calling out, "on your left!"
Even rode through a Oktoberfest!
To start off our epic five mile swim day -
We did our burpees then we were on our way!
Got to the swim start and got checked in -
Just 45 minutes before we begin!
Mandatory briefing at 9:15 -
This ain't a triathlon you know what I mean!
You're not allowed to hold onto the boats at all -
Even if you feel like you're hitting the wall!
The floating aid station was a pontoon boat!
There was no motorboating - we had to float!!
Bloody Mary's for them; crackers for us.
The volunteers were nice - we were no fuss!
The turn around was at the WW II Veterans Memorial Bridge
Up river 2.5 miles - just a smidge!
On the way back we both had a kayak guide -
Too bad they weren't allowed to give us a ride!!
As luck would have it - the water was calm.
Except for when the boats came flying along!
Finally to the last turn buoy and swim shore;
So glad we won't have to do this anymore!
Once on land we got our bling!
Beer, hot tub, and food we felt like a king!
To the Bridge and Back was a well run race -
Maybe next year we'll work on our pace!
Posted by gmgizmo9 at 4:30 PM No comments: