On Saturday the final workout of the CrossFit open was here -
STUR will participate in 20.5 never fear! 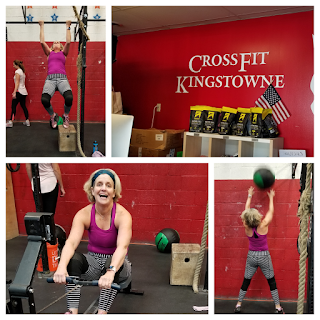 Guess what?! STUR got a special treat-
PBun came to cheer her on - super sweet!
The workout was rounds of rowing and wall ball bombs -
She then did three pull-ups which will certainly give her DOMS.
First time this open she decided to be judged -
He did a great job, she won’t hold a grudge!

PBun enjoyed spectating at the CrossFit Open
She's inspired to one day try it again
After cheering STUR she headed to Lake Accotink
For 90 minutes on Candy 2.0 followed by a 20 minute run brick

Then she had hoped to do some work on her back lawn
But a terrible headache laid her up, hope it's gone before dawn!
Sunday morning STUR picked up the Beast and they headed to the St. James...
Super close and convenient - not a pain!

PBun was there too for the first time at the new facility -
Nice, clean, and fancy - the rabbits are lucky for its availability.
All three rabbits ended up in a different lane...
Didn’t matter as a workout they would all attain!

STUR grabbed her buddy Lazlo as soon as she got home -
Around Fort Hunt Park for a few miles they would roam!
Right after swim PBun bid STUR and the Beast farewell
She would run for an hour or so around the industrial park - swell!
Once again she saw some confused geese
They must think the parking lot is pretty neat!

Towards the end she did some faster repeats
Then breakfast for her and Goodmanator, which can't be beat!
Next up she worked on the leaves in her yard
She just mowed them up, it wasn't too hard.
Riley helped her by moving logs out of the way
When they were done with the ball they did play!